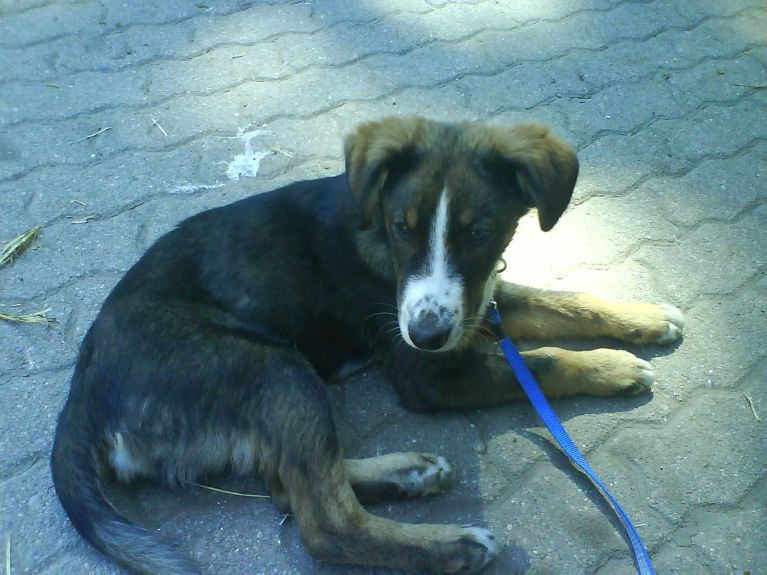 How our journey through cancer, love, and heartbreak began

I know, I know. How can I say that. But it’s true. I swear. Let me tell you. And I’ll start at the beginning…

These pictures are from May 2007. My boyfriend and I were still living on a horse farm and I had always wanted a dog. (I’d had a dachshund when I was little. -The perfect little dog, rescued from a shelter at about 9 years old. )

I always knew that “rescued is my favorite breed”, I believe that there is so much animal-suffering in this world that I don’t want a recognized breed but rather “save a lost little soul, give him a home. They are such THANKFUL little creatures!” -This tells you that I was ten years younger and, well, ten years stupider…

After looking at the few shelters in my area where I either encountered people that didn’t seem too interested in actually placing a dog in a new home or just didn’t find the right dog, I got on the Internet (I know, I know…). Here in Europe there are many organizations now that try to find new homes for dogs from Eastern and/or Southern European countries because the shelters there are usually overcrowded and many dogs are just still treated very badly in those countries.  So, methinks, if you can’t seem to find a dog here, look there.

I wasn’t even set on getting a puppy. I did have a vague idea of how exhausting they can be and I also figured that to give a grown dog a chance would be nice, too. However, there were already around 5 other dogs on the horse farm (not ours) and it just seemed easier to bring a puppy into the existing pack than a grown dog with an unknown history.

So, long story short: I found this little man, with the darling spots on his nose in a shelter in Greece. His name was Bobo back then, which was not acceptable (Germans, you know what I mean…). So we called him Manfred, or Manni for short (Nowadays he is Manfred whenever I get angry with him). This is him on his second day in his new home: 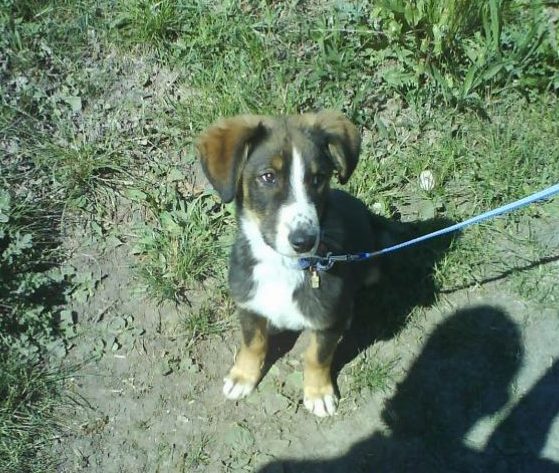 our journey from then to now

Cute as can be, right? I know! And he fit right in! (With the rest of the pack, that is)

He was around 5 months at the time and his social behavior with the other dogs was impeccable! We had two Terrier ladies who raised him sternly and the two big dogs taught him to play properly. Sooooo, could it get any better, are you asking? Well…..

He bonded with the other dogs immediately and had a great “childhood” but what he didn’t bond with (because he had his own pack now) was, well, us. He would take off and we would hide (puppy-101, I thought), thinking he would turn around and go: “oh no, my people are gone!”. nope. not in your wildest dreams. He would show up again 30 minutes later going: “oh, nobody here anymore? ok, I’ll just go somewhere else then.” We had people in the neighborhood who would come over on a daily basis with Manni in tow saying: “I brought Manni back, he was in our backyard”.  “um, yeah, sorry for that. thanks.”

After a week we started calling him “Manfred the Destroyer” (as in “Conan the Barbarian”) because while he was getting the hang of being left alone for minutes at first, more later, very quickly, he would then open our wastebasket, tear it apart completely and leave everything in tiny little pieces all over the apartment. Mind you, he never ate any of it, he just, well, destroyed it.

Driving was another issue. He would take off as soon as he saw us getting the car keys. Mainly because he would always throw up 5 minutes before we reached our destination. No matter if said destination was 10 minutes away or 2 hours. That did save us from more harm once too, though: he once threw up three of my panties that apparently he stole from off the clothes-line and swallowed whole. (That had happened once before. My boyfriend took Manni out and was like: “Gosh, oh no, the pup has blood in his stool! no, hang on, that’s… wtf? It’s one of Tina’s panties!!) Embarrassing? um, yeah.

During our time at the horse farm Manni also discovered his love for prey. Well more for hunting, really. He loves the kick and the rush he gets from going after thingsthatmove. The barn cats started it, but it quickly went on to deer, rabbits, and yes, you guessed it: joggers, bikers, trucks…

He doesn’t want to kill anything he just wants to hunt. A couple of years back we got new kittens in the stables that are as phlegmatic as can be. Great!! I was scared that Manni would somehow try to harm them but what he does is he tries to get them to run away. If barking doesn’t help (which it never does) he starts -I am not kidding- poking them with his nose!

We eventually moved away to a little house with our own yard.  I knew I had a dog on my hands that needed some kind of work to be content so we tried different things over the years. Man-trailing he excelled in, agility he never took seriously (obstacles? those are no obstacles for meeeee!!!), stuff like that. Being Manni though, he chose his own job: protecting the house. Although we have many neighbors there’s only a handful at best that we know by name. However, we would be sitting in our yard in the summer and Manni would bark at everyone and everything that would come too close to our hedge. We would then hear, from the other side, “aww, Manni, it’s just me!”.

Nowadays we have this radius around our house and I am sure it has a set diameter I just don’t know how much it is exactly. You would have to ask the dog… On the way back from our walks (only on the way BACK) once anyone or anything starts to move inside this radius Manni goes ballistic.  Yes, I have tried dog trainers, read books,… I don’t know how it came about, I’m sure it was my fault somehow, but with the cancer diagnosis and amputation: to be honest nowadays it just is what it is.

Moving away from the big dog pack was a good thing in terms of Manni’s bond with us. From the not-listening dog we’ve at least advanced to the selective-listening dog… 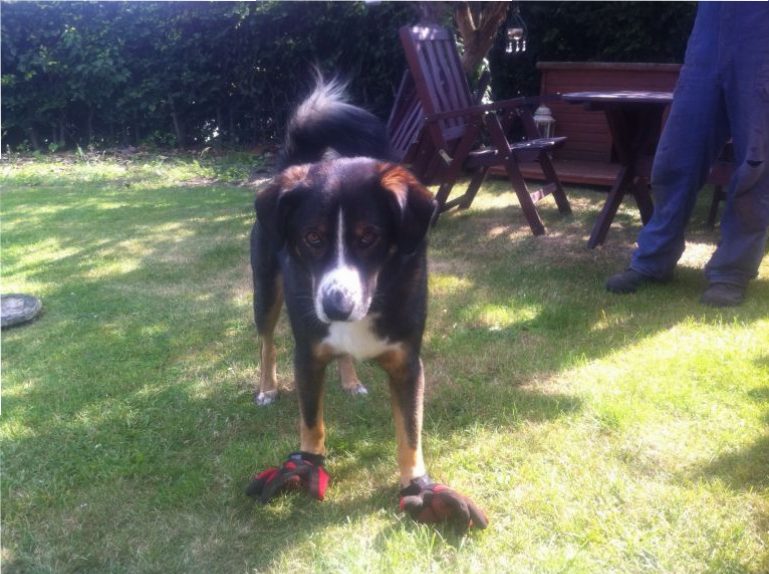 Manni in HIS backyard. His.

But as you can also see in this picture, with all the, ok let’s be nice, character-quirks my dog has: because he has always been so self-sufficient and strong-minded, he is also up for everything. Be it uneven grounds like metal grids, boats, planks, tree trunks, public transport, you name it, Manni will be unfazed and you can take him everywhere. Even the office. (ok, after pooping on an electric fence once 🙂  he is scared of those, but that’s really it!) 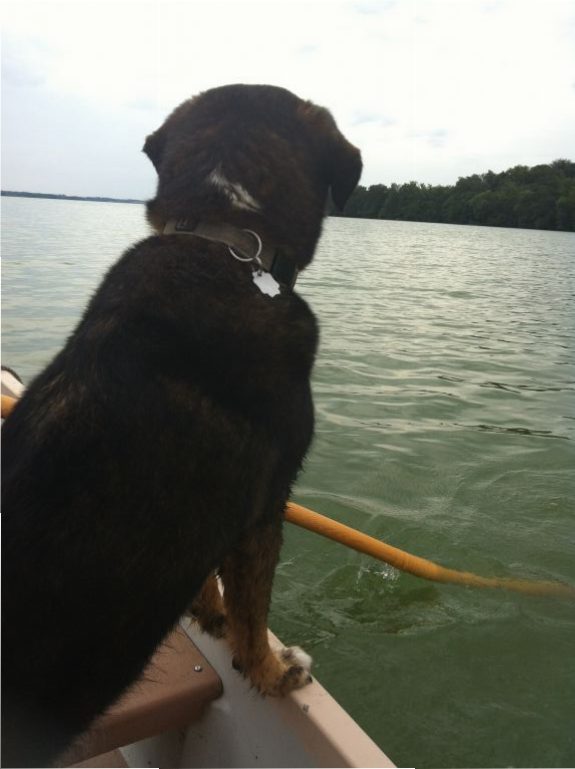 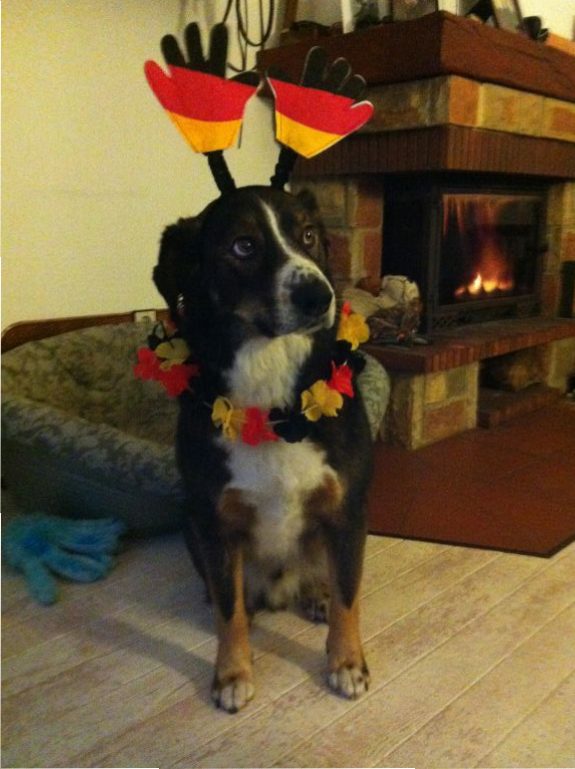 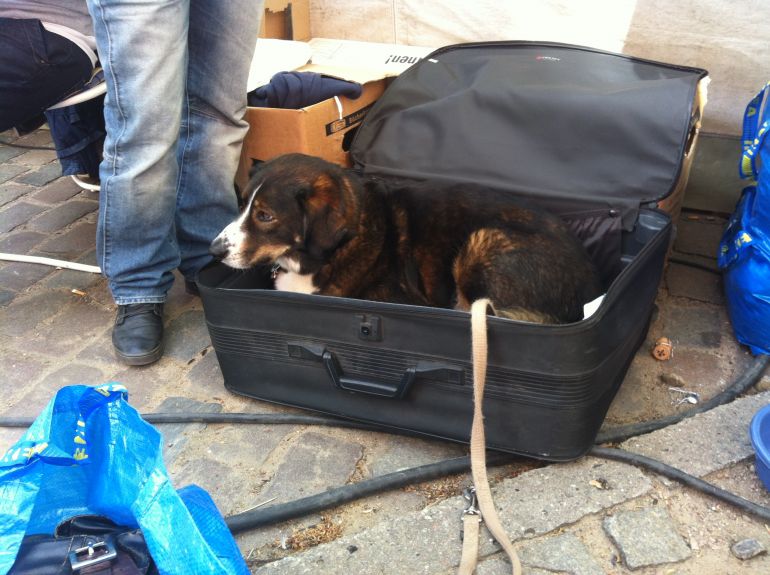 So, maybe you can tell how much I have been through with this little nightmare of a beginners’ dog. But I have also always been immensely proud of this independent spirit, of his fearlessness, of his pure joy and zest for life – all of which made sure that he was equipped for our journey through cancer and heartbreak.

I have written about the diagnosis and the amputation and the whole aftermath in the blog,which you can find here but I wanted to try and explain how this little nightmare in a lot of ways mirrors my soul, I guess. And, as my mother likes to say: everyone gets what they deserve  🙂

If you’ve actually managed to read this far: wow! good job! 🙂 thank you for your interest!! seriously, it means something.

I shall leave you with a few more impressions of my souldog: 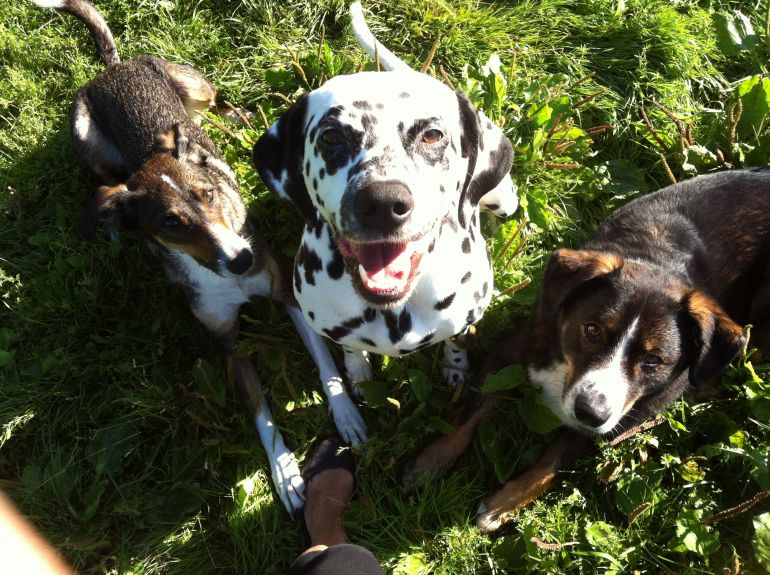 Manni and his girlfriends, neighbordog Lilly and Luna the Dalmatian. 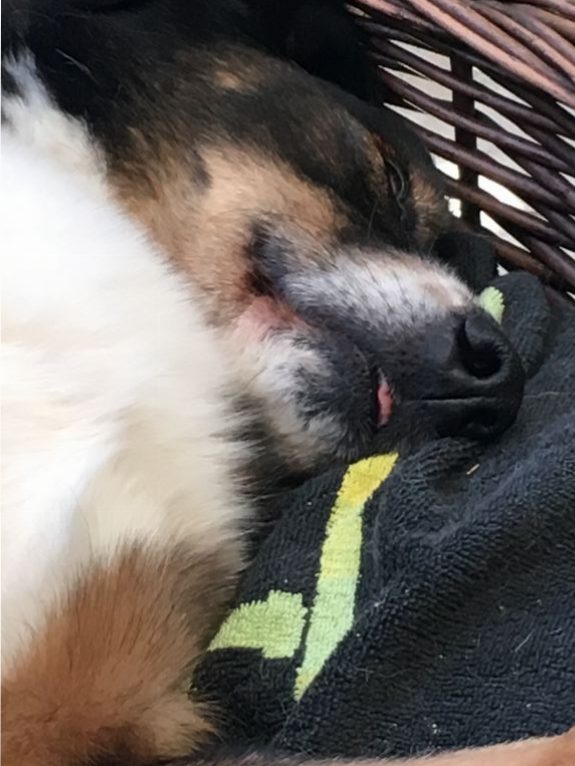 I know all of us think that our dog is the cutest, but honestly, mine really is!! 🙂 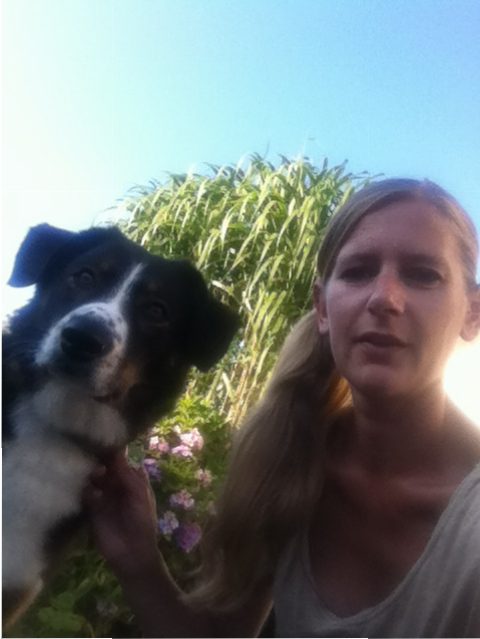 Goodbye from us and thank you for reading!