Still, I love the way our tripawds are able to move and here’s a little ‘motion study’ from our (very) early morning walks. At least we get the early twilight by now. 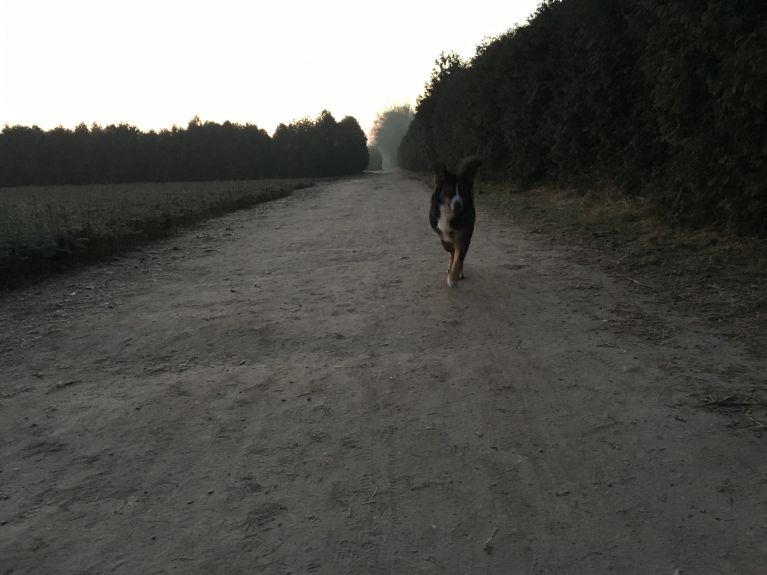 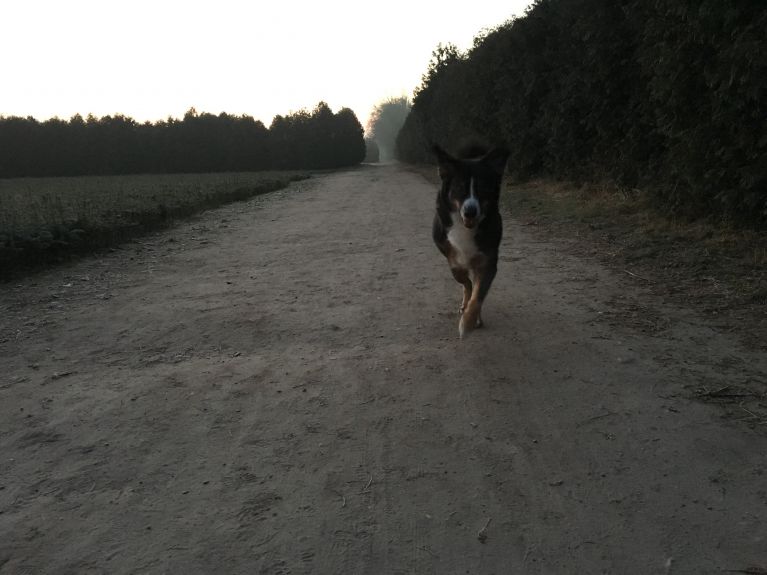 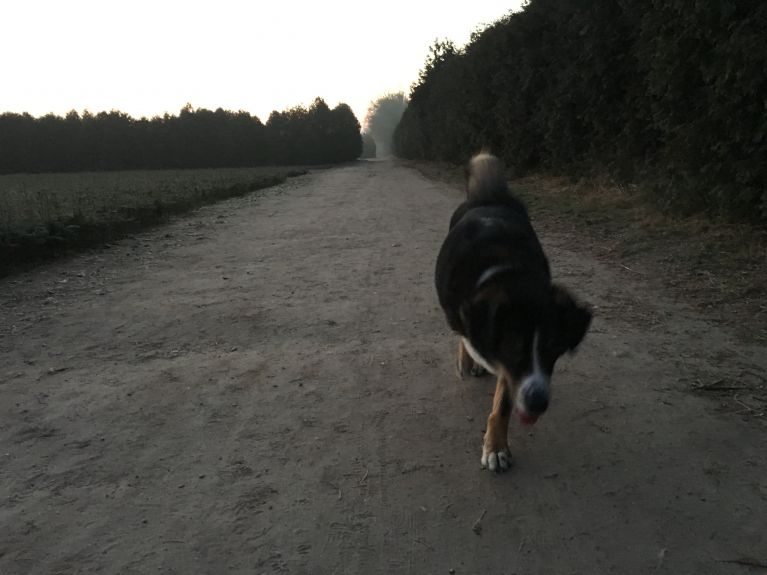 Another bodypart that just can’t be overlook for its prominent features (even if you try, you just can’t look past it…) when studying tripawds in motion is, of course, 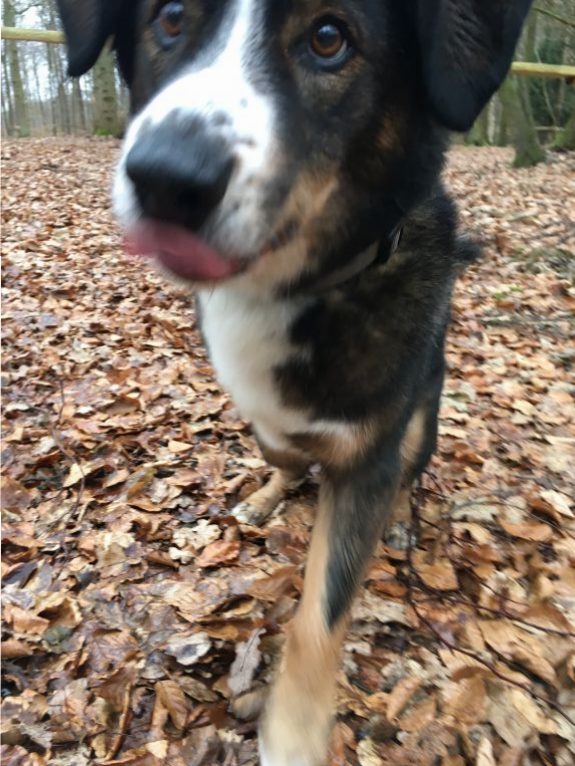 (I have this theory now where I am convinced that Manni uses his tongue for balance. If it were a few inches longer he would use it as a leg 🙂 )

And I don’t know about you all but while obviously all of our dogs are a bundle of joy and cute as can be the things that get me most are noses and, of course,

Still plenty of paws left for vivid dreams of course.

I’ll leave you with my favorite picture of all times, from back when there where more paws. (This was actually taken during a fotoshoot with my horse, the dog was just more fotogenic 🙂 ) 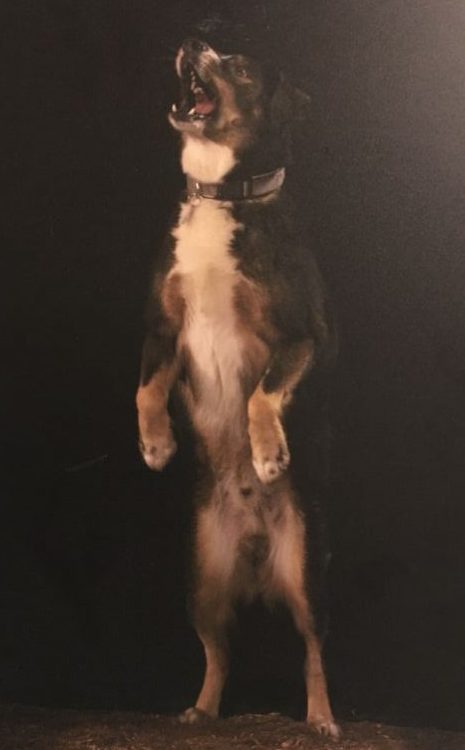 Have a great week, give good cuddles and enjoy

As you can see: wonderdog is doing better again. While I was worried about him the last two weeks he is now finally back to his boisterous self. We were at the vet’s on Friday and they said we should have x-rays taken, just in case, uhm, as you know, time is against you, uhm, maybe the stomach issues are just symptoms of, you know, lung…. What? er, ok I guess. *sweating*  But! clear x-rays! again!! (and the next x-ray appointment in 3 instead of 6 months. “you know, time is aga…” “yes I know! I don’t need you to tell me that, just give me the appointment”.

Then, of course, followed another weekend, more excitement.

Saturday morning was enchanted-forest time again. A beach is fun but nothing beats a good run in the forest, says the silly dog. The boys had some fun:

So after playtime on Saturday morning, guess what happened at night: 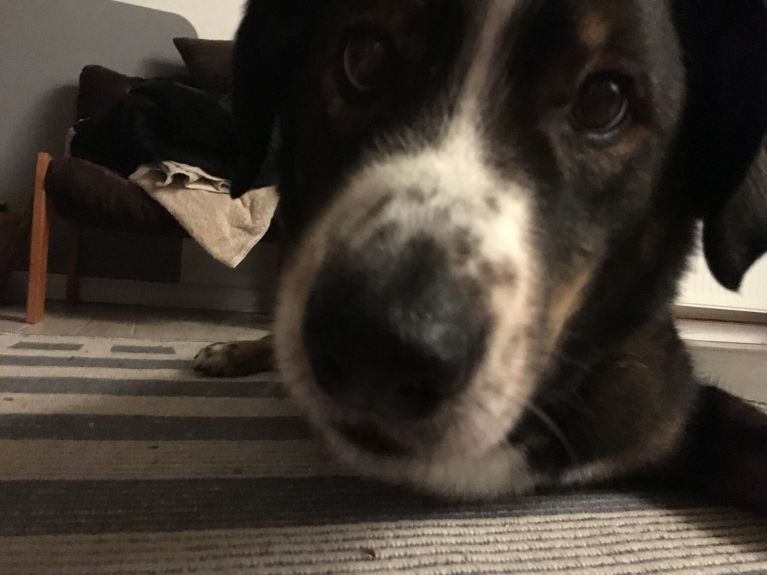 you have a WHAT for me?? 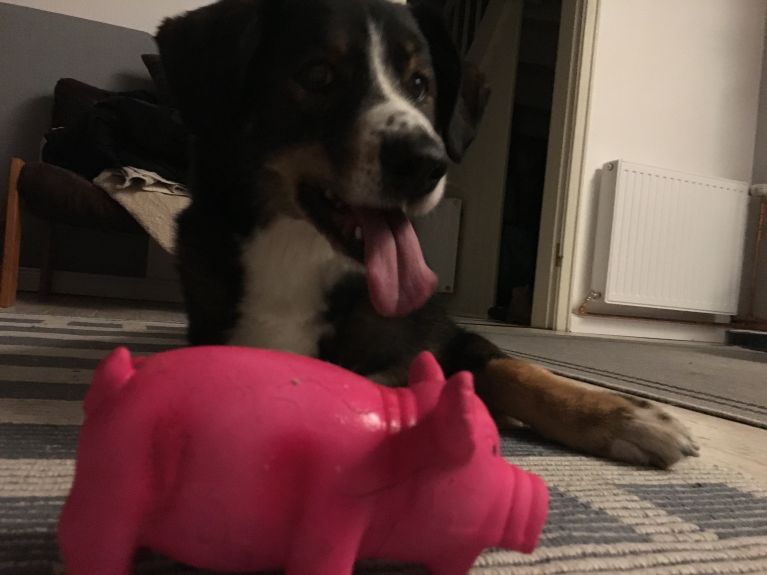 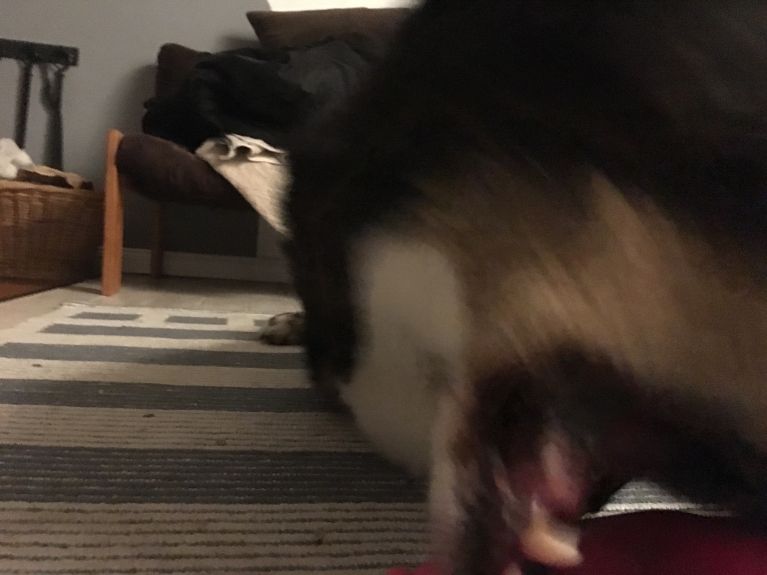 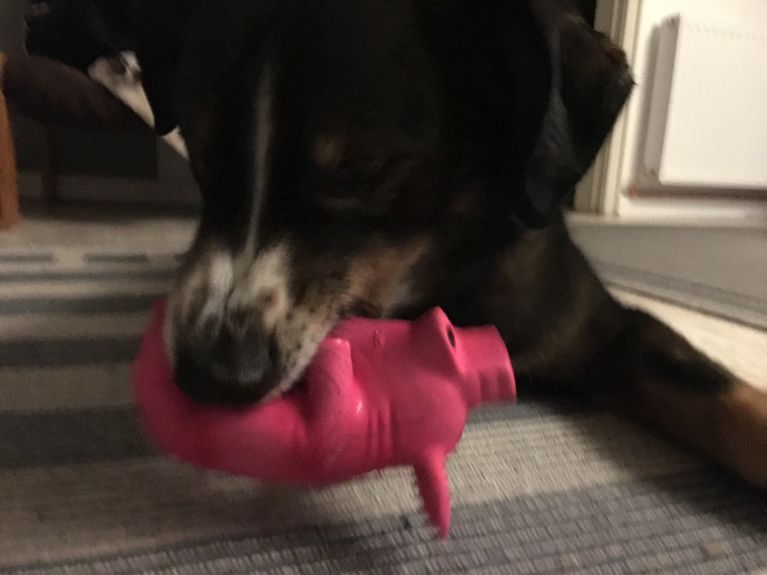 So that was our Saturday. Oh, hang on, we also had the UPS-guy there with a huge package that we had been waiting for. We used to be pretty active and would take day-trips with Manni or he would run next to our bikes. Of course since being a tripawd things have kind of slowed down for him and biking was out of the question while we had a foldable cart for him for the bigger trips. That worked ok but we always had to lift Manni in and it was not all that comfy for him. And now, we have a new buggy!! I was really excited because that one has a drawbar for the bikes and a stroller function. So, you know, what do you do when you have new gadgets? Right! You have to try them!

I was a little anxious if Manni would actually go in that thing since he’d never seen anything like that before, it moves, and so on. I needn’t have worried of course. After hopping next to it for all of 10 minutes he hopped into it without any coaxing. just like that. That in my mind is SO clever. I mean, for the dog to go: Ok, they got me this new thing for when I get tired, oh, I’ll just hop in. That’s amazing! Probably the harder thing now will be for us to tell him that this in no way excuses him from exercise!! 🙂 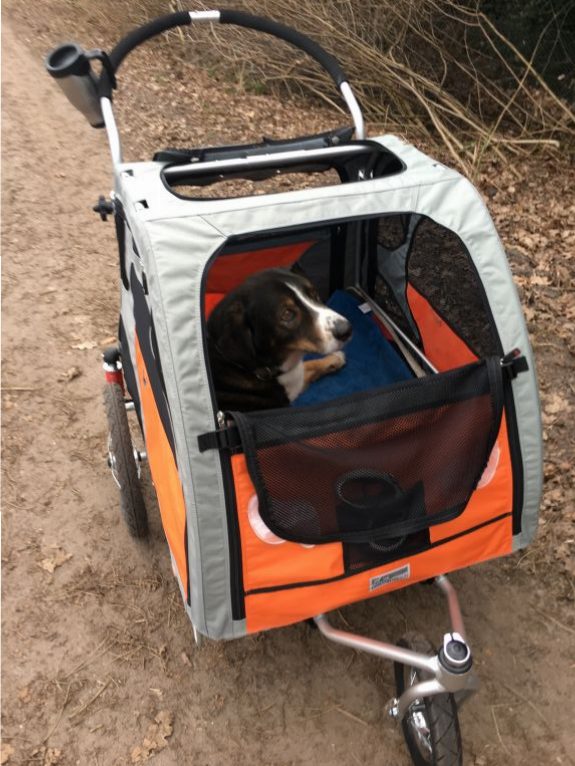 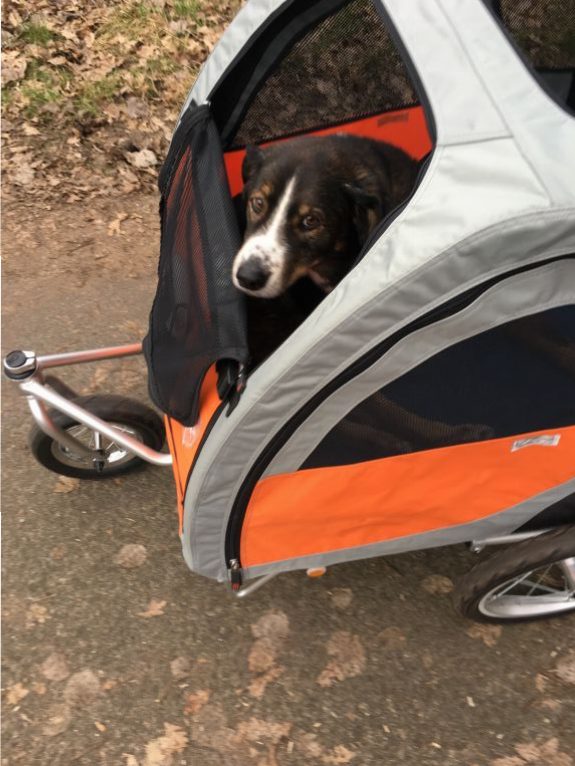 So, you can see: off to new adventures we go in the weeks to come!! Can’t wait! (Ok, it’s a liiiiittle cold for me to be biking just yet, but that will come, too)

I hope you all had a good weekend, too!

Tina and, of course, Manni

So the last weekend of January was Manni’s birthday weekend. He turned 10! Another milestone for us! Our milestones since the diagnosis included: for all fur to grow back: check. Summer and sea: check. Colder weather and the woods: check. Snow! For him to see snow again!!: check (could have been more though). Live through Christmas and into the new year: check. His 10th birthday: check!!

Since I am afraid of what happens if I run out of milestones the next one I set is my birthday in April. This year is the year of big birthdays for all three of us. All of us celebrate the next decade so he had better stick around for my birthday as well.

So after we celebrated Manni’s birthday with his friends at the dog park I talked to him at night about what he wanted to do with the rest of the weekend: 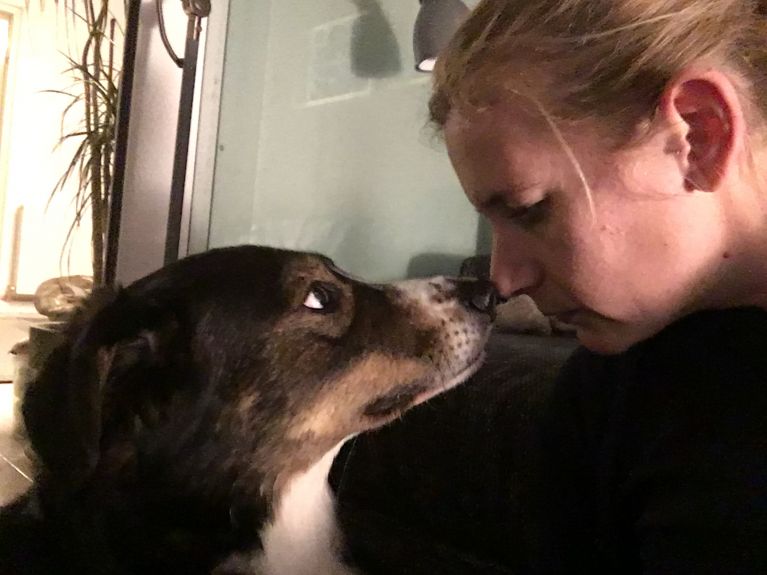 “Tell me: what do you want to do for your birthday?” “I want to go to that beautiful place with the forest and the lakes and the sand!”

Hey! That’s a great idea! We had not been there in a while. Ok, that’s decided then. 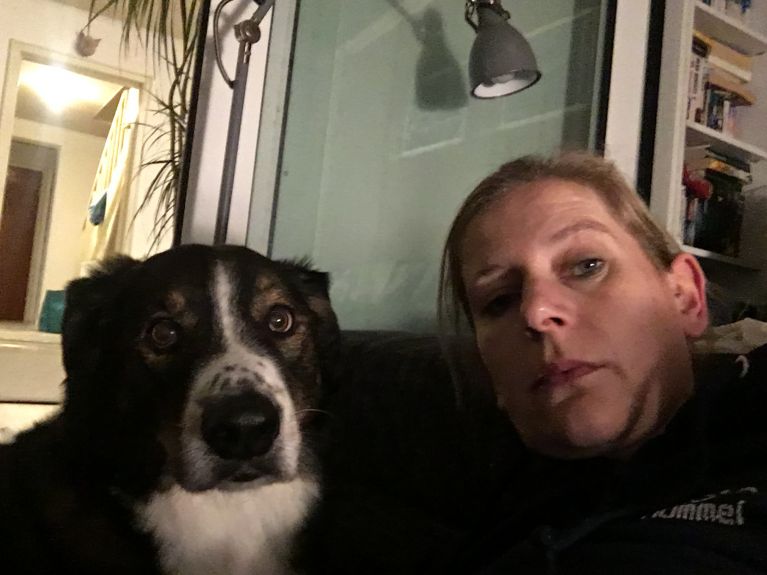 Looking forward to our trip!

So the next day we packed our things and off we went. All in the spirit of Manni’s milestone birthday! 🙂 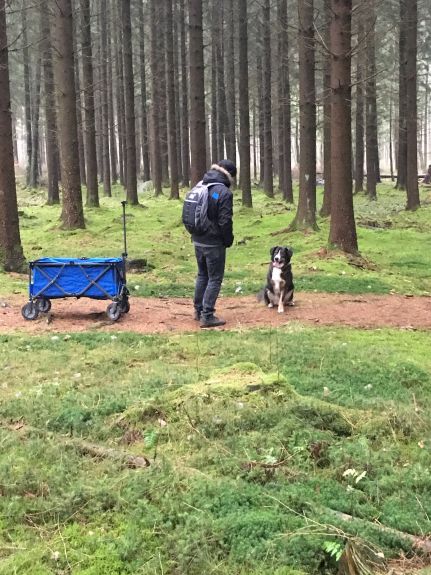 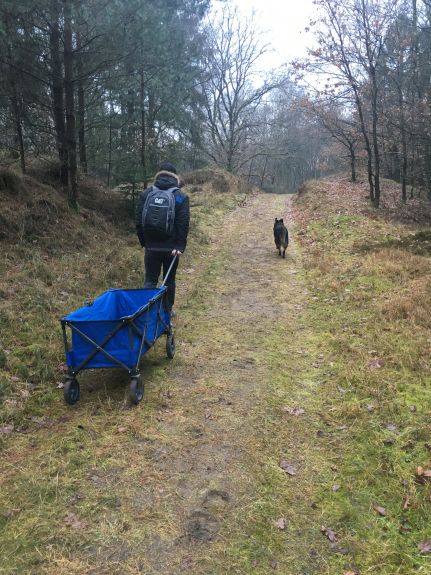 That is one of the trips that we have to take Manni’s buggy, or cart along because you can walk for miles there and that’s just a little too much for a tripawd. While he doesn’t exactly love his cart he has it figured out by now that if he gets exhausted he stops at the cart and puts his front paw up so we can lift him into it. Smart pup that!

The place is gorgeous and we had a picnic with cake and coffee for the two-leggers and a birthday-bone for birthday-boy. 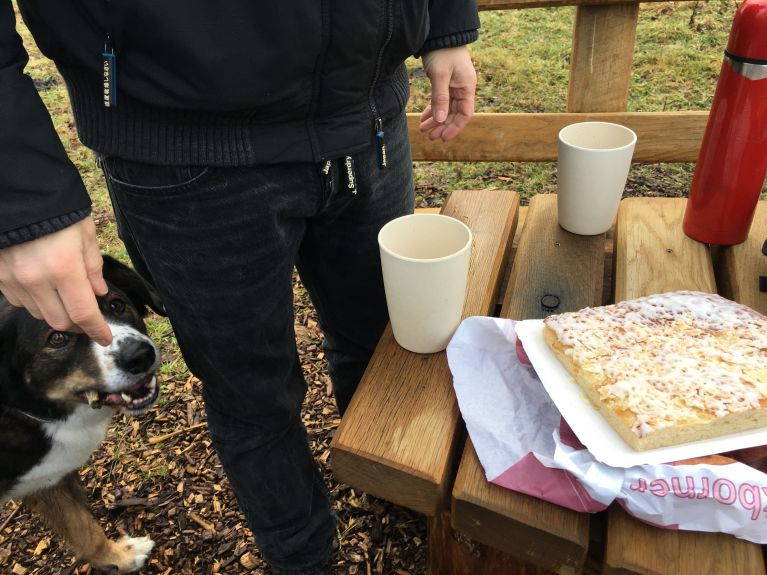 The last leg of our trip to took us to the part with the lakes. Even if it’s freezing Manni loves to cool his feet a little and sit and play in the sand. We are just along to enjoy the view: 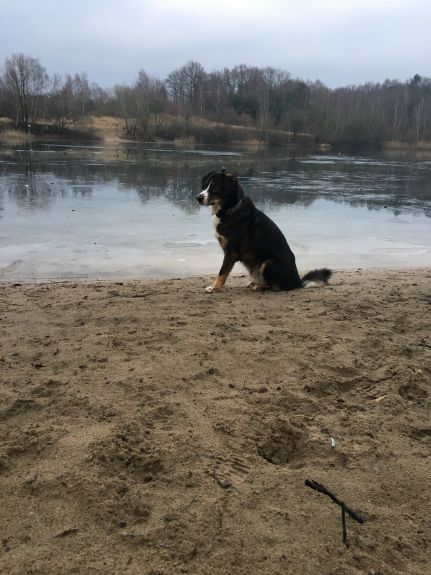 “Don’t worry mom, I have everything under control!!” 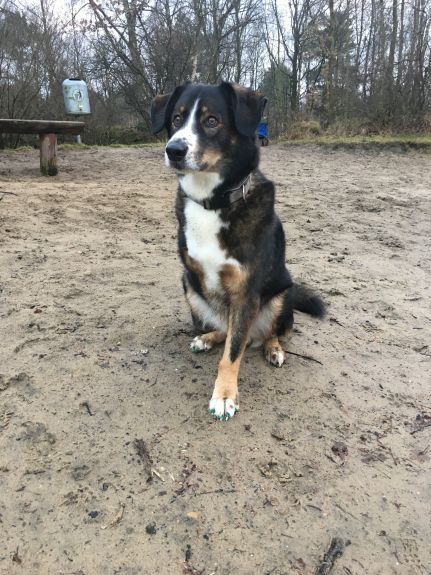 Afterwards, all of us were pretty exhausted but very happy and relaxed. Manni went straight to his bed. We found that we really have to work on his definition of right direction/wrong direction 🙂 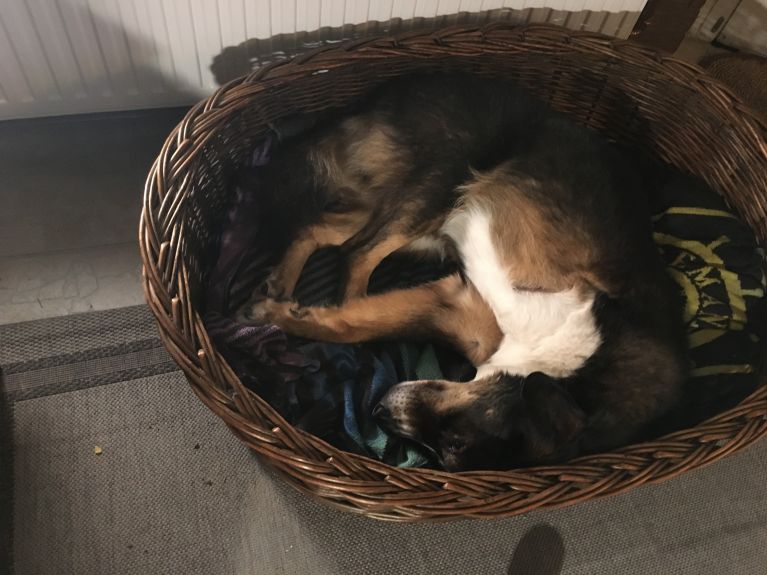 So after dinner that day it was more than about time to go to bed. And to enjoy time together. After a wonderful “together-day” like this, if you were to look for us, you would find this: 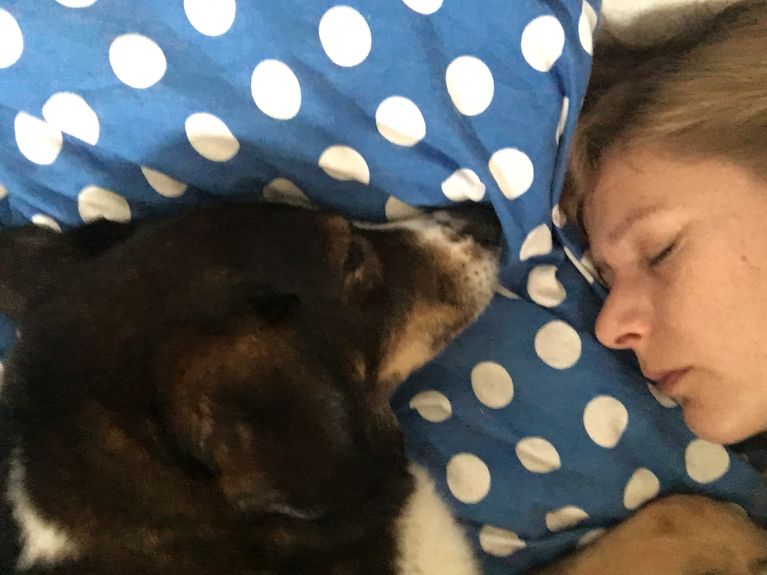 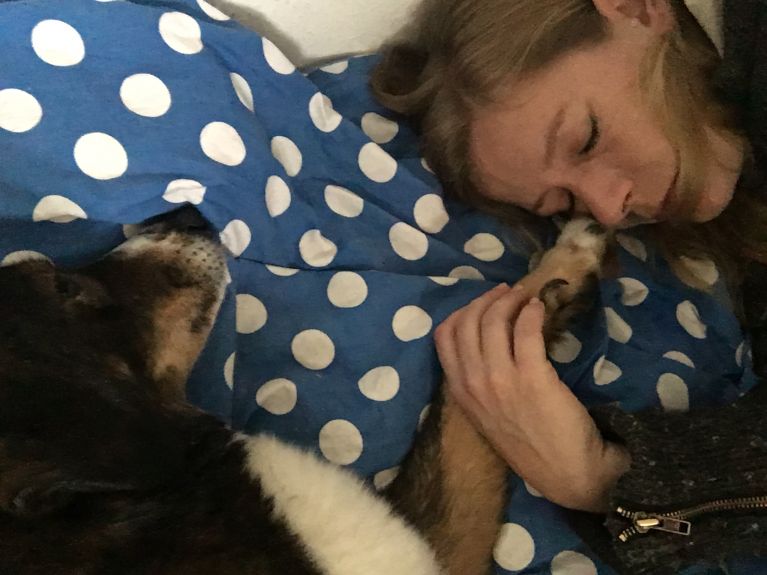 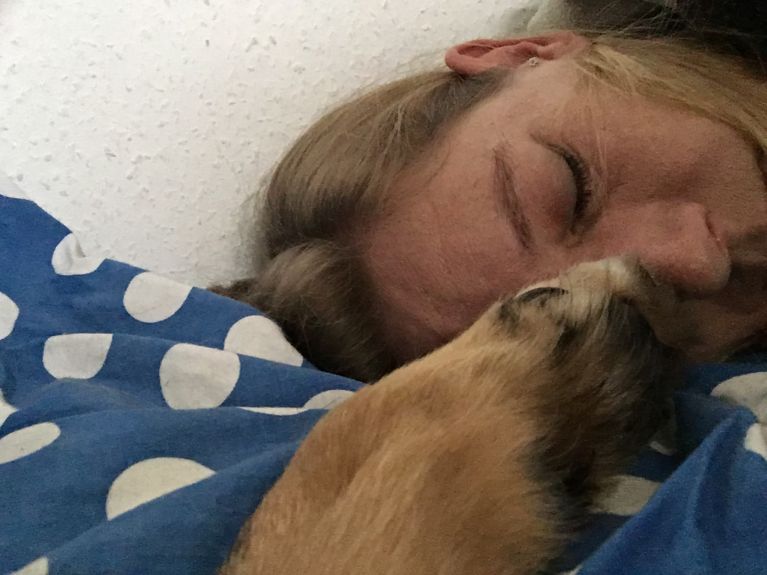 Not sure who’s watching over whom, but I guess it doesn’t matter.

Never has time together been more precious than these last 14 months. Let’s make it 14 more.