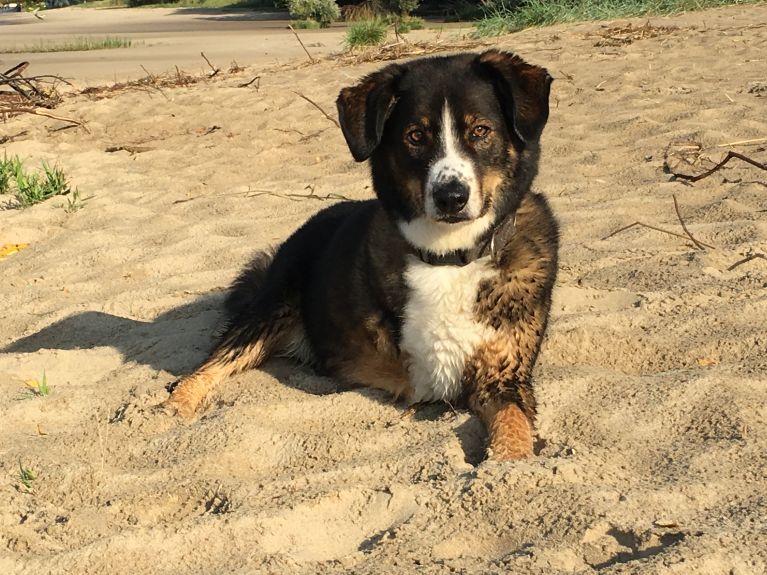 First of all: thanks for all the wonderful comments on my first post!

I was asked what we did for the phantom pains, if we did chemo, and so on. Let me start at the beginning. That being the day of my having to decide whether to put my dog to sleep or let them amputate a whole limb on an animal that has it in his nature and all instincts to, well, run. I tend to sound a little bitter on that topic, don’t I? Sorry.

So I decided I wanted to say I tried everything. However, I so feared that trying everything was not doing the dog justice but rather put him through hell. But it’s not like you can un-make that decision. The whole thing was actually a year ago yesterday. A Thursday. It was 9 (yes, in words, nine!) hours until I heard back from the clinic. 9 hours of devastation, pacing and crying. They failed to prepare me for how long the surgery takes. I have heard of quicker surgeries from other people by now but to be honest: it does make sense for it to take that long. I mean: you don’t just saw off the bone, do you?

So they finally called, late at night, when hours before I had already knocked on their door wanting to know if my dog made it. Then they told me I would “probably” get my dog back by Sunday, they wanted to keep him under observation and because he was still bleeding out of a drain. I was a wreck by Sunday, questioning my decision over and over, going in circles. The clinic offered me to visit him (offered, not advised) which I didn’t do because, well, he gets to see me and then I leave again? No.

On Sunday I was told he was still bleeding a little and that they wanted to keep him until Tuesday.

So on Tuesday I waited in one of the little rooms in the clinic, anxious and scared, and in hopped my little warrior. 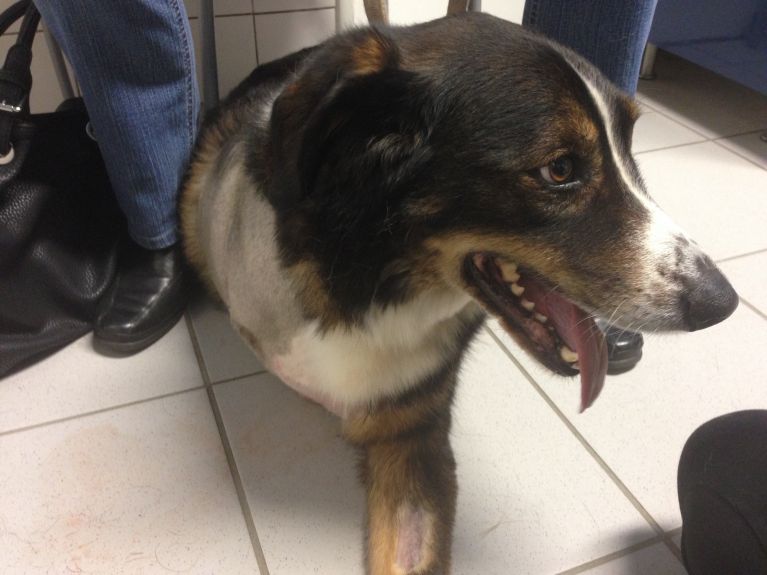 He still seemd a little dazed but I got him in the car and drove home. Yes, of course with different meds and advice and the next appointment in my purse.

When I got him out of the car he screamed for the first time. I almost dropped him and immediately started to tear up. I know I know: be strong for them. Carry on. Easy to say.

The worst sound I have heard in my entire life. Literally. That dog became my responsibility when I decided to give him a home. And he became a part of myself over the years. That scream (and the many more to come) broke my heart. And made me question my decision over and over again.

This was at home one of the first days: 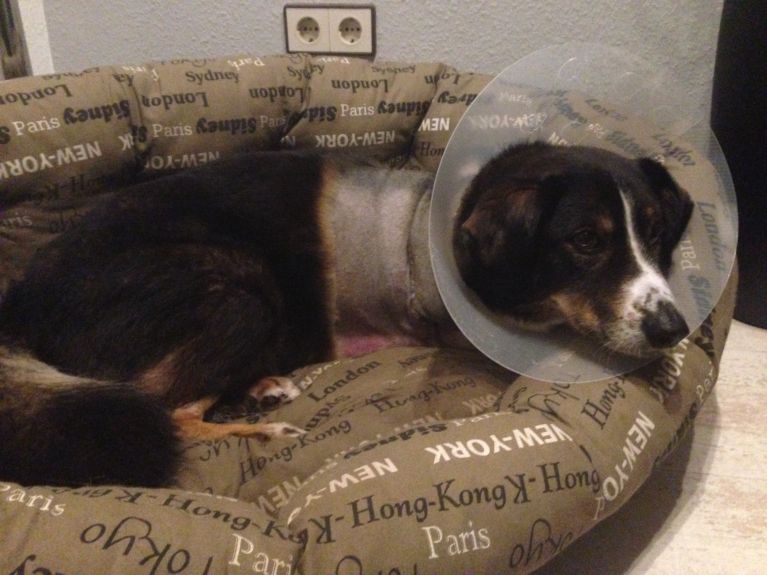 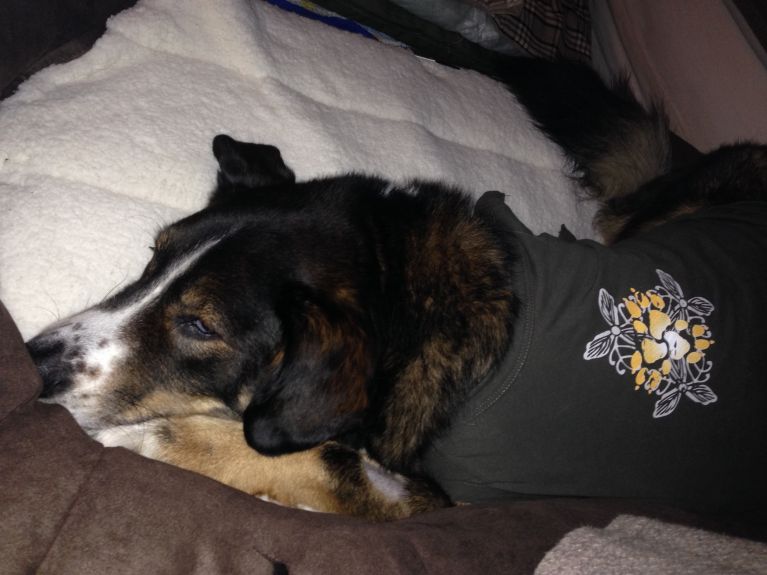 It actually looked alright except for a big lump on the underside with fluid built-up. The suture was pretty good and the surgeons actually made an effort to close it in a way that wouldn’t mess up his coloring – which is a nice touch.

The first night, Manni actually went outside and peed. And screamed. twice. After that he refused to move pretty much. He did eat. Sort of. Little bits. But only if we brought it to him. Going outside would mean one would gently pull and one would gently push from behind. Forcing him. I HATED IT.

To make this shorter: along came Lilly and things got better.

The phantom pains, the screaming, stayed with us for 6 months. Yes, six. And we did try different meds (I have not heard of Gabapenthin here in Germany but it might just be called differently).

The screaming turned into yelping and it got less over time.

As I said before I gave Manni four weeks to manage. He only just made it and I cursed myself for putting him through it every single minute of every single day. That’s how it really was. Not like I sugar-coat it almost every day when people stop, stare and then say how “well he manages, poor thing”.

I know I should be thankful I still have him, especially after 12 months and believe me when I say I AM! So much!

But the first weeks, and the diagnosis, and that decision: I don’t know about all of you who have been through similar things, but it was traumatic for me. And I hope, boy do I hope, less so for my dog.

To answer the question about chemo:

yes, we did do that. The way things were explained to me, especially the median survival rates with vs. without, I didn’t feel we had a choice. And so far, time has proven that to be the right thing. I have not mentioned chemo before and am not getting into it more because we really sailed through it. An upside, for once. From what I’ve read it’s the same ingredients here that they use in the U.S., carboplatinum and such.

We did physical therapy as soon as the suture allowed it and through the therapist found a group for handicapped and old dogs where they use different parcours and trails to build up muscles and balance. I will post a video of that later, I think. It is priceless for rehab and also a great way to spend quality time with my dog!

Let me finish with this: I do not regret the decision I made in the slightest. I am oh so thankful for every second more that I have with my dog. My beautiful miracle wonderdog. But, and that is a pretty big but: if I had chosen the other path it would have been ok, too. I truly believe that. But at least now both of us can say: we did it! We used all available resources and all our strength but we did it! and we made it this far!

If anyone is reading this who is still in the decision-making process: it is so easy to say “go with your heart”. I didn’t feel like my heart really knew, either. I just know you have to stand by your decisions and live with them. and, above all, do whatever you can for your pup – they are your responsibility.

It actually feels really good to be writing this all down, venting. Thank you for bearing with me!

last, not least, by popular demand 🙂 this is Lilly, the amazing neighbordog and Manni, about 6 months post-amp: 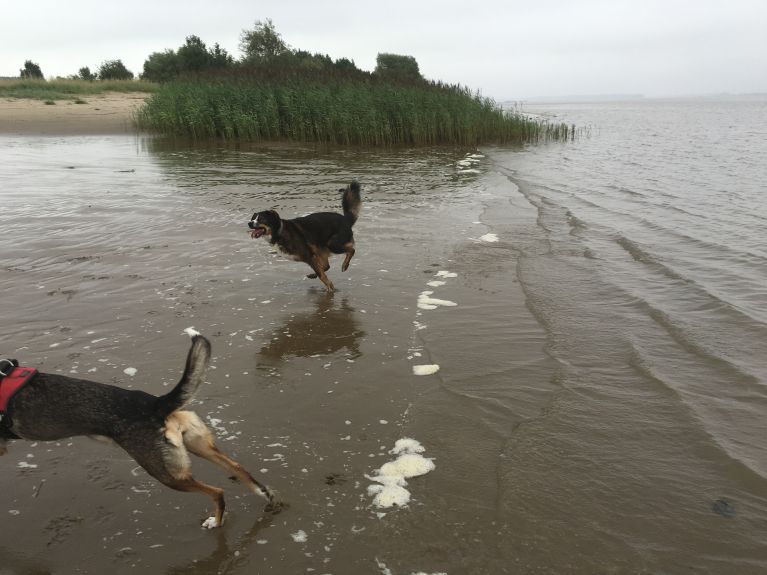 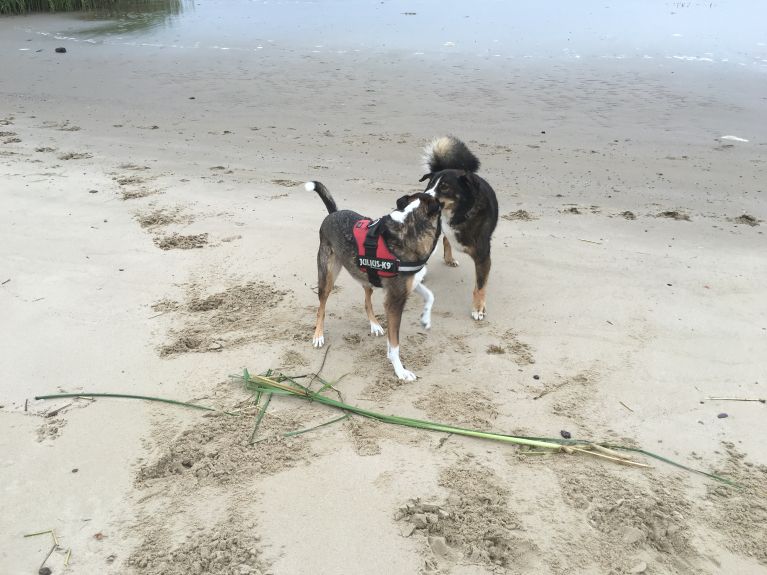 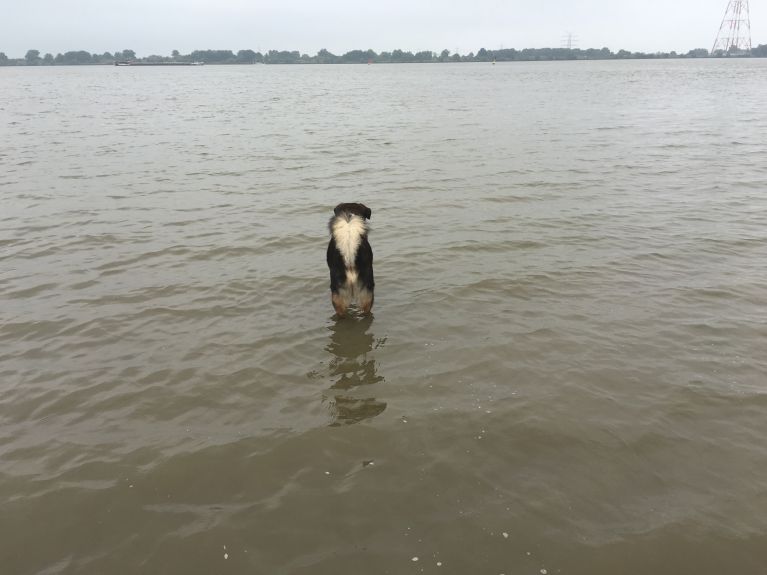